​Throop was elected to three terms in the Rhode Island General Assembly representing the people of Providence. During his first term in 1788–1789, he argued that Rhode Island should join other states in ratifying the new U.S. Constitution, which had been hammered out in Philadelphia in the summer of 1787. In supporting ratification, Throop spoke not only for his Providence constituents but also for his fellow physicians throughout the state, who overwhelmingly shared his Federalist leanings.

However, Rhode Island was the most staunchly anti-Federalist of the thirteen original states and therefore became the last state to ratify the Constitution. The mutual antipathy between the minority Federalists and the majority Anti-Federalists was sharply personal as well as political, and the split colored Rhode Island politics for more than two decades, dooming anything that might be on the Federalists’ political agenda. One item on that agenda was the chartering of the Rhode Island Medical Society, which was probably delayed by as much as a quarter century, simply because the doctors were on the wrong side of the state’s deep political divide.

The first president of the Rhode Island Medical Society, Dr. Amos Throop, was born in Woodstock, Connecticut, on April 30, 1736. His parents, Amos and Frances (Davis) Throop, came from Bristol, Rhode Island. (The town belonged to Massachusetts at the time.) Amos Throop, Sr., graduated from Harvard in 1721, taught school in Providence, and then, at the age of 25, became pastor of the Congregational church in Woodstock, Connecticut. The popular young clergyman’s service to the congregation was cut short after eight years by his premature death at the age of 33 in September 1735. His son, the future founder and first president of the Rhode Island Medical Society, was born eight months and three weeks later.

​The political fortunes of the Federalists improved enough in 1811 that a charter for the Rhode Island Medical Society finally became politically viable. The General Assembly voted the charter on February 25, 1812, and designated Amos Troop to set the time and place for the first meeting. Throop convened the organizational meeting on Wednesday morning, April 22, 1812, at ten o’clock in the Senate chamber of the Old State House in Providence. There the doctors of Rhode Island adopted bylaws and elected Amos Throop as their first president. He was eight days shy of his 76th birthday.

Amos Throop practiced medicine in Providence his entire adult life. In 1801, he also became the first president of the Exchange Bank, which he founded with his brother-in-law, Zachariah Allen, Sr.

He was still president of both the bank and the Medical Society when he died on April 13, 1814. The entire “faculty” of the Medical Society turned out for his funeral, which took place in St. John’s Episcopal Church (later Cathedral) on North Main Street. (The present cathedral was built in 1810–1811; the Throops owned pew 32. In need of costly architectural repairs, the building was closed in April 2012.)

Mary died five months after Amos, in October 1814. The couple had no children. Through Mary’s sisters, the Throops’ extended family and descendants came to include many Allens and Dorrs, several of whom played very notable roles in the history of Rhode Island. Amos and Mary Throop lie side by side in Providence’s North Burial Ground. 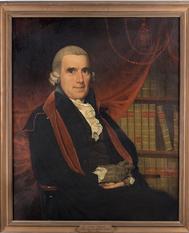 ​Young Amos was sent to school in his parents’ home town of Bristol, and then, still a young boy, he had the good fortune to be taken into the household of Providence’s most prominent physician, Jabez Bowen, from whom he learned medicine as an apprentice. He studied anatomy under Dr. Robert Gibbs, who found it relatively easy in Providence to acquire cadavers of black slaves for his pedagogical purposes. (Enslaved blacks constituted about 11 percent of Rhode Island’s population in 1750, the highest proportion in the colonies.) When North America’s first medical school opened in Philadelphia in 1765, Throop spent a winter there honing his medical skills. 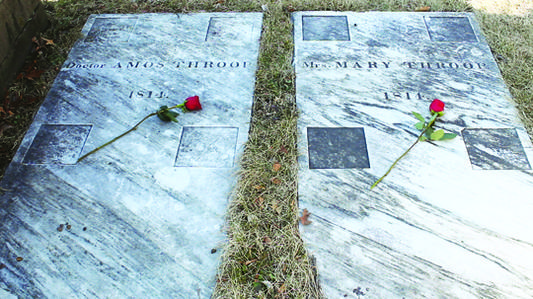 The elegant brick Georgian house the Throops inhabited during the last 13 years of their lives still stands at 118 North Main Street in Providence (the “Russell House, ” built 1772 and formerly numbered 19 North Main). 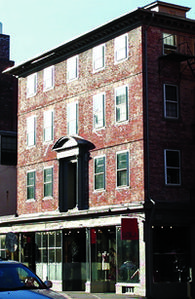 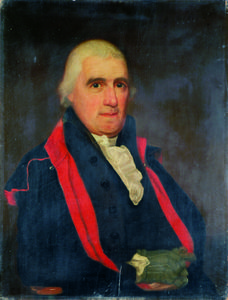 Throop served the patriot cause during the Revolutionary War, mainly as a doctor but also as a soldier, though he never saw combat. By his own self-deprecating account, his military service was brief and unheroic. He is said to have quipped that he was a son of Asclepius more than of Mars, and more adept with “blue pills than leaden ones.”

Throop was known for his kindly manner, courtly demeanor, generosity to the poor, hospitality to friends and family, and casualness in collecting his fees. The story is told that upon Throop’s death, a substantial list of unpaid patients included one man who still owed Throop for his own delivery into the world. (Throop was the first male obstetrician in Providence.) Throop practiced moderation in his habits and counseled his patients to do the same. He was a faithful Congregationalist, but under Mary’s influence he became a communicant of St. John’s Episcopal Church. The Anglican congregation in Providence had been founded in 1722 by Mary’s grandfather, Gabriel Bernon (1644–1736), a Huguenot.

Described by his 19th century biographers as “a gentleman of the old school” and a man of firm convictions, Amos Throop was also anything but narrowly moralistic. A niece recalled that as a little girl she had once wanted to attend a theatrical performance that was scheduled to take place in the Old State House on Benefit Street. At the time, anything having to do with theater was widely considered to be morally suspect. Indeed, theater was completely banned in Providence for much of the 18th century – and it was always off limits for children. The girl’s kindly Uncle Amos smuggled her in under the ample folds of his long cloak – nor was anyone inclined to notice anything amiss on the person of the venerable Dr. Throop.